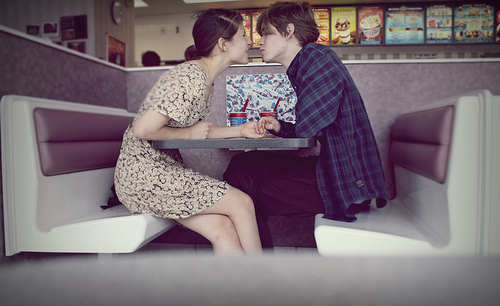 Learn to read the codes. Does he want a relationship or just plain romance?

In last week´s post, the type of women that men want to marry, we learned that men who are ready to commit are looking for a keeper while those who just want to play around are sports fishing.

Maybe you´re seeing a guy right now and you think he´s great but you aren´t sure if he´s really into you or if he wants a serious relationship with you.

***
If you want to know what men really thinks about love and relationships, read Steve Harvey´s Act Like A Lady, Think Like A Man.
***

While you can´t quickly tell if a guy wants a (serious) relationship only after a couple of dates, and you also don´t want to initiate that serious talk, you can read his actions as you spend more time seeing him. There are ways to decode what he´s up to with you.

Is he searching for a woman to complete his life or is he up just for some romance and fun? Here´s how to know if he´s looking for a keeper or not.

If his conversation with you is extremely superficial, and never seem seem to graduate beyond the surface, he´s sports fishing; if he genuinely seems interested in your needs, life, and future, then´s he´s looking for a keeper.

2. Does he take your requirements seriously?

If he laughs off your requirements and standards, then he´s sports fishing. If he´s willing to abide to your rules,and actually follows through on them, then he´s looking for a keeper. Most importantly, if he´s really into you, he treats you with respect.

3. How quickly he calls you

If he takes your phone number but waits longer than twenty-four hours to call, he´s sports fishing. If he calls you right away, he´s showing that he´s genuinely interested in you, and is most likely looking for a keeper.

***
If you want him to love you, learn how to capture his heart and love you forever.
***

If he takes you out on a date and lets you pay, or only kicks in his portion of the bill, he´s sports fishing. If he pays the bill, he´s showing that he´s willing to provide for you, which means he´s likely looking for a keeper.

If he tells you he´s going to be somewhere at a certain time, and he constantly showing up late without so much as the courtesy of a phone call, he´s probably sports fishing. If he shows up like he supposed to, he´s likely looking for a keeper.

6. Does he introduce you to the people important to him?

If you never met his friends, family, co-workers, or other people who are important to him, he´s sports fishing. If he introduces you to his people as his girl, he might want a relationship with you.

***
If you want to get a man´s attention and make him pursue you, learn how to conquer love by playing hard to get.
***

7. Is he willing to meet your friends and family?

If he keeps offering up excuses for why he can´t meet your friends and family, he´s sports fishing. If he agrees to go to a barbecue party or a social event where he will be introduced to family, friends, and co-workers, he may have considered you a keeper.

8. If he financially stable?

If he does not have himself together financially, emotionally and spiritually, he may be sports fishing. If he´s capable of providing and protecting his potential family the way a real man should, then he might be searching for a keeper.

9. Is he fine with you dating other men?

If he´s cool with you seeing other men, he´s sports fishing. If he agrees to date only you and wants you to do the same, then he´s considering committing in a serious relationship with you.

Have you seen any of these signs in him? Are you now able to tell if the man you´re attracted to wants a relationship with you?